The social profitability of photovoltaics in Germany 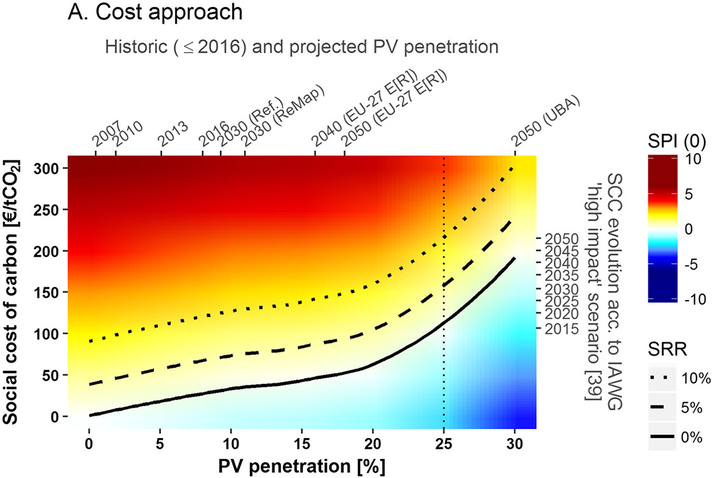 While Germany has led the market in photovoltaic (PV) implementation throughout the last decade, there has been increasing criticism of PV support policies due to their high cost. Although declining, the levelized cost of electricity (LCOE) from PV is still above the German wholesale electricity price. However, using LCOE as an evaluation yardstick falls short in at least 2 respects: It neither takes into account integration costs rising with PV penetration (ie, undervaluing its actual cost) nor avoided externalities of replacing conventional for renewable generation (social cost overvaluation). We thus calculate the social profitability of PV in Germany by including not only private costs and benefits but also integration costs to the electricity system and avoided environmental externalities, using the internal rate of return and the profitability index as indicators. Our results show that when these factors are considered, the social profitability of PV in Germany is higher than 10% at the lower bound of the social cost of carbon (150�/tCO2) up to a penetration level of at least 15% and positive up to a penetration level of at least 25%. Results also show the level of private profitability if all externalities were internalized and assert that subsidies are justified to align private and social profitability. The proposed method could be used as a complementary indicator to private profitability by public institutions, development banks, and companies with social responsibility values.